Curious Components was a web series for hobbyists who wanted to learn intermediate Arduino topics. Each episode introduced you to a new Arduino component, such as a flex sensor, or an engineering concept, such as calibration. This series was produced by Bryan Jackson for our Digital Arts class. I wrote, directed, and hosted the show. My friend Luis Mascareno was the videographer and illustrator.

In high school I was an eager viewer of Diggnation and subscribed to a bunch of channels on Miro. Since then, I always wanted to create my own series of online videos, which stems from my childhood dream to be a filmmaker. With my Digital Arts class, I was given the opportunity to produce my own series.

Working with Luis, we produced five episodes and I was taken aback by how comparatively professional it appeared to me. Maybe it was the Canon camera, maybe it was Luis' wonderful editing skills, or maybe it was the guidance of our professional director Mr. Jackson. After making a bunch of random amateur videos with my friends, it was encouraging to properly produce webisodes for a change. 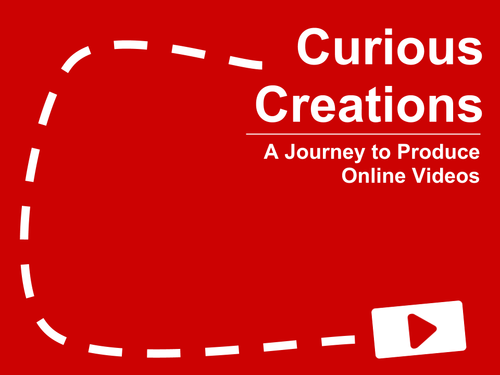 As you can see from the opening slide, the series was originally going to be called Curious Creations. This previous concept attempted to teach viewers how to make awesome gadgets with ease and enjoyment. The reason for planning a show like this was because I found a lot of videos from the DIY community to be dull: instructional videos feel algorithmic, some videos lack personality, and some don't tighten up their edits. The idea of Curious Creations was inspired by Bre Pettis, Alton Brown, and The Secret Life of Machines. Here was the pitch for the show as I presented it to my Digital Arts class:

“Curious Creations” is a series of dynamic web videos that shows you how to build your own must-have gadgets like a robot that plays drums or LEDs that turn your bike wheels into a pac-man game. Unlike dry electronics tutorials, “Curious Creations” aims to teach you the process of gadget creation in an entertaining and playful manner. And because these videos are on dynamic web pages, the written instructions will match the explanations given in the video so that you can make your own neat gizmo with little hassle.

Unfortunately, Luis and I had to shrink the scope of the project to make it more manageable for two busy college students to tackle. 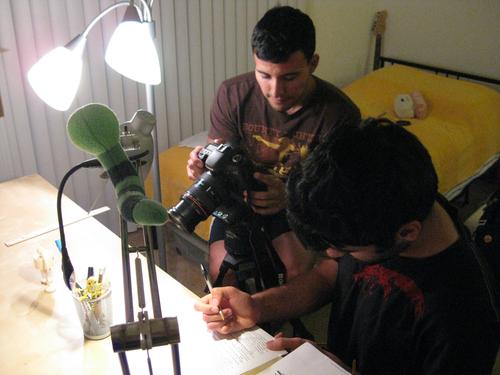 Luis and I producing an episode of Curious Components.

Here is a brief article I wrote about our experience with the home-made production of this show.